In 1964, John Fascia was working as an electronic technician with the Bristol Company. His wife, Helen Fascia, was pregnant with their first daughter, Louise. John had been roasting nuts and selling them at his work to supplement their income. In order to increase sales, they had to find something new. The answer was obvious: chocolate. Because, as John likes to say, “Everybody loves chocolate.” 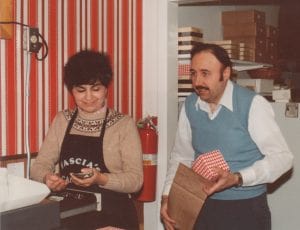 With chocolate nut clusters and molded pops becoming popular, the Fascia’s set up a store and cooking area in the basement of their Waterbury home. Soon, their second daughter Lynne was born. Laurie came along a few years later and the business continued to draw loyal customers, largely through word of mouth. The Fascia family began making different confections, including Caramels, Toffee and Creams.

The first candy box had their home address on it and featured a Victorian lady cooking in a kitchen. When the box company went out of business, the Fascia’s had to design their own box and adopted the Lady in profile, becoming the logo we use today.

Their chocolates became so popular that there wasn’t enough room in the basement to match the demand. It was time to move on. 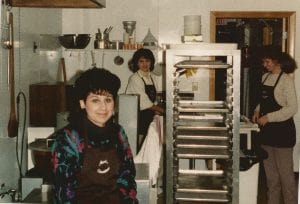 Fascia’s opened their first retail location on Meriden Rd. The 600 sq ft store wasn’t big enough for production, so the chocolate was still made at home. 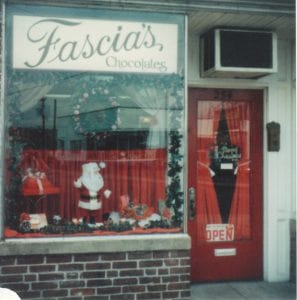 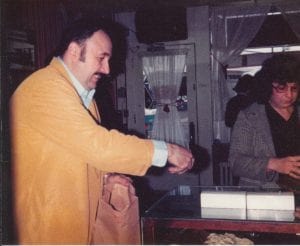 In 1985, Fascia’s Chocolates finally moved out of the basement and relocated to Wolcott St, with an expanded storefront and production line.

With the help of their three daughters, John and Helen’s small business grew over the next thirty years.

In 1990, Fascia’s moved location once again to 40 Industry Ln off Lakewood Rd. The new building had 2700 sq ft of space.

In May of 2008, John and Helen were looking forward to the quiet of another summer while also thinking about the future of the business. Their daughters concentrated on raising young families while still working at the business. The Fascia’s were suddenly notified that their building was sold and, with their lease ending, Fascia’s Chocolates was forced to move within a two month window. The location found on Thomaston Ave. was in an industrial park that was too small, too remote and had no handicap accessibility.

After a full year in the new location, the Fascia family was making it work through the establishment of a couple of Retail Partners but something had to change. Son in-law Carmen ran a manufacturing company that was planning to move to the Midwest. He and Louise did not want to make the move.  Louise was a little hesitant, but she agreed to work with her husband and the second generation of Fascia’s officially took over the business. 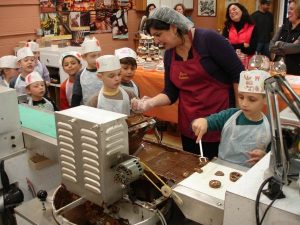 Fascia’s moved one last time to their current location on Chase River Road in 2013. They started offering parties and public tours and began making their own gelato.

In June of 2015 Fascia’s partnered with the Naugatuck Railroad.

Like many other small businesses, Fascia’s was hit hard by the COVID19 pandemic. But the store remained opened with limited hours and curbside pickup.

Fascia’s was able to bring a little sweetness to a difficult time.

Through each of the Waterbury locations, Fascia’s has continued to be a destination and tradition for our loyal customers.

Fascia’s Chocolates is still family owned and operated by the originating members and continuing generation of the Fascia Family. We still make all products in-house and in small batches to ensure the highest quality and freshness possible.

We use cookies on our website to give you the most relevant experience by remembering your preferences and repeat visits. By clicking “Accept All”, you consent to the use of ALL the cookies. However, you may visit "Cookie Settings" to provide a controlled consent.
Cookie SettingsAccept All
Manage consent

This website uses cookies to improve your experience while you navigate through the website. Out of these, the cookies that are categorized as necessary are stored on your browser as they are essential for the working of basic functionalities of the website. We also use third-party cookies that help us analyze and understand how you use this website. These cookies will be stored in your browser only with your consent. You also have the option to opt-out of these cookies. But opting out of some of these cookies may affect your browsing experience.
Necessary Always Enabled
Necessary cookies are absolutely essential for the website to function properly. These cookies ensure basic functionalities and security features of the website, anonymously.
Functional
Functional cookies help to perform certain functionalities like sharing the content of the website on social media platforms, collect feedbacks, and other third-party features.
Performance
Performance cookies are used to understand and analyze the key performance indexes of the website which helps in delivering a better user experience for the visitors.
Analytics
Analytical cookies are used to understand how visitors interact with the website. These cookies help provide information on metrics the number of visitors, bounce rate, traffic source, etc.
Advertisement
Advertisement cookies are used to provide visitors with relevant ads and marketing campaigns. These cookies track visitors across websites and collect information to provide customized ads.
Others
Other uncategorized cookies are those that are being analyzed and have not been classified into a category as yet.
SAVE & ACCEPT